CENTER FOR EXCELLENCE IN ONCOLOGY 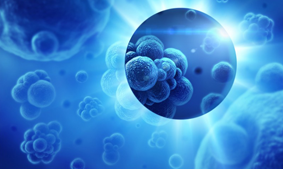 The term oncology literally means a branch of science that deals with tumors and cancers. The word "onco" means bulk, mass, or tumor while "-logy" means study. Oncology is the diagnosis and treatment of malignancies (cancers), including breast, prostate, colon, lung, and ovarian cancers as well as brain tumors, leukemia, lymphoma and many other types of cancer. Oncology is a branch of medicine that deals with the prevention, diagnosis and treatment of cancer. It includes medical oncology (the use of chemotherapy, hormone therapy, and other drugs to treat cancer), radiation oncology (the use of radiation therapy to treat cancer), and surgical oncology (the use of surgery and other procedures to treat cancer).

Each of the cells of the body have a tightly regulated system that controls their growth, maturity, reproduction and eventual death. Cancer begins when cells in a part of the body start to grow out of control. There are many kinds of cancer, but they all start because of out-of-control growth of abnormal cells.

The three components which have improved survival in cancer are:
1. Prevention - This is by reduction of risk factors like tobacco and alcohol consumption
2. Early diagnosis - Screening of common cancers and comprehensive diagnosis and staging
3. Treatment - Multimodality management by discussion in tumour board and treatment in a comprehensive cancer centre

Cancers are best managed by discussing in multi-disciplinary tumour boards where medical oncologist, surgical oncologist, radiation oncologist, pathologist, radiologist and organ specific oncologists meet to find the best possible management for an individual patient considering the physical, social, psychological, emotional and financial status of the patients. It is very important for oncologists to keep updated of the latest advancements in oncology as changes in management of cancer are quite common. All fit patients whose cancer progresses and no standard of care treatment options are available should be enrolled in a clinical trial.

Bone marrow is the spongy tissue inside some of the bones in the body, including the hip and thigh bones. Bone marrow contains immature cells, called stem cells. Numerous people with blood cancers such as leukemia and lymphoma, sickle cell anemia and other life-threatening diseases, rely on bone marrow or cord blood transplants to survive. Healthy bone marrow and blood cells are needed in order to live. When disease affects bone marrow so that it can no longer function effectively, a marrow or cord blood transplant could be the best treatment option; for some patients it is the only potential cure.Bone marrow is the soft, spongy, gelatinous tissue found in the hollow spaces in the interior of bones.The average weight of this tissue is about 4% of the total body weight, or 2.6 kg in an adult weighing 65 kg. Progenitor cell (stem cell) lines in the bone marrow produce new blood cells and stromal cells. Bone marrow is also an important part of the lymphatic system.

Bone marrow is the soft spongy tissue that lies within the hollow interior of long bones. In adults, marrow in large bones produces new blood cells. Bone marrow forms around 4% of total body weight (around 2.6 kg in a healthy adult).

There are two types of bone marrow:

B-lymphocytes produce antibodies, while T-lymphocytes can directly kill or isolate invading cells.
RBC live for around 170 days and rest are shorter lived and need to be replenished continuously. An average human requires approximately one hundred billion new hematopoietic cells each day. This is performed by the Hematopoietic Stem Cells (HSCs).

Radiation therapy is the use of high-energy radiation to damage cancer cells' DNA and destroy their ability to divide and grow. It may be delivered using machines called accelerators or via radioactive sources placed inside the patient on a temporary or permanent basis. Radiation therapy can help reduce pain and suffering in patients with advanced cancer.